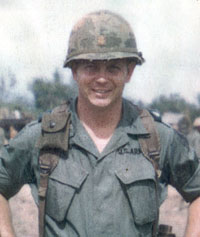 JOHN C. BAHNSEN, for extraordinary heroism in connection with military operations involving conflict with an armed hostile force in the Republic of Vietnam. Major Bahnsen distinguished himself by exceptionally valorous actions on 23 January 1969 as Commanding Officer, Air Cavalry Troop, 11th Armored Cavalry Regiment. Informed of a sizable enemy force, Major Bahnsen landed at the hostile area, reconnoitered and marked a landing zone for a rifle platoon in full view of the hostile troops. Leaving the site, he saw fifteen communists and engaged them with his rifle, firing from the window of his helicopter. He killed two of the enemy and remained at a low altitude to direct additional fire upon them until his crew chief was seriously wounded by the hostile barrage which struck their ship. Major Bahnsen evacuated the crew chief, refueled and rearmed, and sped back to the battle. Again taking the communists under fire and forcing them into a confined area, he marked their positions and directed five air strikes against them, while at the same time controlling four separate rifle platoons. Intense enemy fire crippled his ship, forcing him to acquire another aircraft. On his return, Major Bahnsen landed to guide in the lift ships carrying an additional infantry unit, and then led a rifle platoon through dense terrain to personally capture two enemy who were attempting to escape. While the captives were evacuated by helicopter, he remained on the ground and led the squad two kilometers back to friendly positions. Major BahnsenÃ­s extraordinary heroism and devotion to duty were in keeping with the highest traditions of the military service and reflect great credit upon himself, his unit, and the United States Army.

BG Bahnsen joined the Legion of Valor in 1970 and resides in West Virginia.