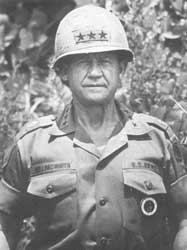 LIEUTENANT GENERAL JAMES F. HOLLINGSWORTH, then Lieutenant Colonel, Infantry, Headquarters 2nd Battalion, 67th Armored Regiment, for heroism in action on 11 April 1945, in Germany. Colonel Hollingsworth personally led, in a 1/4 ton truck, a Task Force of tanks and infantry for fourteen hours in a dash of seventy-one miles from Gr. Douren, Germany, to the Elbe River at Schonebeck, Germany. On three occasions during the day he went into towns with small forces mounted in 1/4 ton trucks and, by suprise, effected a complete surrender without bloodshed of the German garrisons. When stopped by a road block in Schonebeck, near a bridge, he continued to direct the fight, although he was wounded twice and barely able to walk. Only after the bridge had been blown and all hope for its capture had vanished did he consent to evacuation for his wounds. Colonel Hollingsworth’s heroic actions and aggressive leadership were directly responsible for the accomplishments of the Task Force under his command and are in keeping with the highest traditions of the armed forces.