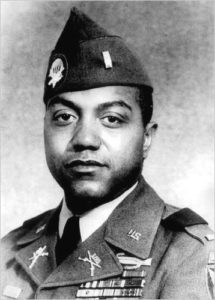 Vernon Baker, United States Army: For extraordinary heroism in action on 5 and 6 April 1945, near Viareggio, Italy. Then Second Lieutenant Baker demonstrated outstanding courage and leadership in destroying enemy installations, personnel, and equipment during his company’s attack against a strongly entrenched enemy in mountainous terrain. When his company was stopped by the concentration of fire from several machine gun emplacements, he crawled to one position and destroyed it, killing three Germans. Continuing forward, he attacked an enemy observation post and killed two occupants. With the aid of one of his men, Lieutenant Baker attacked two more machine gun nests, killing or wounding the four enemy soldiers occupying these positions. He then covered the evacuation of the wounded personnel of his company by occupying an exposed position and drawing the enemy’s fire. On the following night Lieutenant Baker voluntarily led a battalion advance through enemy mine fields and heavy fire toward the division objective. Second Lieutenant Baker’s fighting spirit and daring leadership were an inspiration to his men and exemplify the highest traditions of the Armed Forces.

Baker was born on December 17, 1919 in Cheyenne, WY. He died on July 13, 2010 and is buried in the Arlington National Cemetery. His Distinguished Service Cross was upgraded to the Medal of Honor and was presented to him by President Clinton on January 13, 1997 in a very moving White House ceremony. Baker’s membership was sponsored by Adam Kennedy, a friend of the Legion of Valor and the publisher of “Chronicling The Greatest Warriors and Leaders in Modern American Military History.”