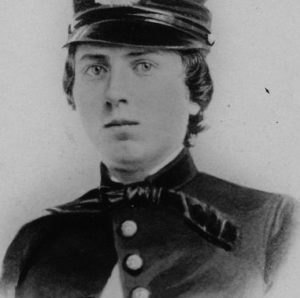 Alonzo Hereford Cushing, United States Army: Distinguished himself by acts of bravery above and beyond the call of duty while serving as an Artillery Commander in Battery A, 4th U.S. Artillery, Army of the Potomac at Gettysburg, Pennsylvania on July 3, 1863 during the American Civil War. That morning, Confederate Forces led by General Robert E. Lee began cannonading First Lieutenant Cushing’s position on Cemetery Ridge. Using field glasses, First Lieutenant Cushing directed fire for his own artillery battery. He refused to leave the battlefield after being struck in the shoulder by a shell fragment. As he continued to direct fire, he was struck again, this time suffering grievous damage to his abdomen. Still refusing to abandon his command, he boldly stood tall in the face of Major General George E. Pickett’s charge and continued to direct devastating fire into oncoming forces. As the Confederate Forces closed in, First Lieutenant Cushing was struck in the mouth by an enemy bullet and fell dead beside his gun. His gallant stand and fearless leadership inflicted severe casualties upon Confederate Forces and opened wide gaps in their lines, directly impacting the Union Forces’ ability to repel Pickett’s Charge. First Lieutenant Cushing’s extraordinary heroism and selflessness above and beyond the call of duty, at the cost of his own life, are in keeping with the highest traditions of military service and reflect great credit upon himself, Battery A, 4th U.S. Artillery, Army of the Potomac, and the United States Army.

Cushing was born on January 19, 1841 in Delafield Wisconsin. He graduated in June 1861 from West Point and was commissioned a first lieutenant. He participated in most of the campaigns and battles of the Army of the Potomac, to include Bull Run, Antietam, Fredericksburg, Chancellorsville, and Gettysburg. During the Chancellorsville Campaign, he was promoted to command Battery A, 4th United States Artillery, in the Army of the Potomac’s II Corps. Although he received a posthumous brevet promotion to lieutenant colonel for his service at the Battle of Gettysburg, no award was announced. He was buried at West Point.

On November 6, 2014, President Obama presented the Medal of Honor to Cushing’s distant relatives in a very moving White House ceremony.