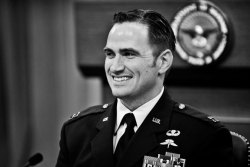 For extraordinary heroism in military operations against an armed enemy of the United States as Special Tactics Officer near Laghman Province, Afghanistan on 4 May 2010. On that date, while attached to Army Special Forces Operational Detachment Alpha and their Afghan partner force, Captain Crawford conducted a helicopter assault into Hendor Village. Upon landing, Captain Crawford received reports that multiple groups of armed enemy were maneuvering into prepared fighting positions in the high ground around the village. As the assault force initiated clearance operations, they began to receive a high volume of accurate machine gun and sniper fire from an enemy force of well over 100 fighters. As the assault force was attacked, Captain Crawford took decisive action to save the lives of three wounded Afghan soldiers and evacuate two Afghan soldiers killed in action. Recognizing that the wounded Afghan soldiers would die without evacuation to definitive care, Captain Crawford took decisive action and ran out into the open in an effort to guide the helicopter to the landing zone. Once the pilot had eyes on his position, Captain Crawford remained exposed, despite having one of his radio antennas shot off mere inches from his face, while he vectored in the aircraft. Acting without hesitation, Captain Crawford then bounded across open terrain, engaged enemy positions with his assault rifle and called in AH-64 strafe attacks to defeat the ambush allowing the aid-and-litter teams to move toward the casualties. While the casualties were being moved, the team’s exposed position once again came under attack from two enemy trucks that had moved into the area and were threatening the medical evacuation landing zone. As one of the aid-and-litter teams was pinned down by enemy fire, and the medical evacuation helicopter took direct hits from small arms fire, it departed with only four casualties leaving one wounded Afghan soldier on the ground. Captain Crawford developed, coordinated, and executed a plan to suppress the enemy, enabling the helicopter to return to their hot landing zone to retrieve the last casualty. While Captain Crawford’s element exfiltrated the village, the assault force conducted a two kilometer movement over steep terrain with little to no cover. During this movement the ground force commander and Captain Crawford’s element were ambushed and pinned down in the open from multiple enemy fighting positions, some as close as 150 meters away. Without regard for his own live, Captain Crawford moved alone across open terrain in the kill zone to locate and engage enemy positions with his assault rifle while directing AH-64 30mm strafe attacks. Continuing to move the team further over 1.5 kilometers of steep terrain with minimal cover, Captain Crawford again engaged the enemy with his assault rifle while integrating AH-64s and F15Es in a coordinated air-to-ground attack plan that included strafing runs along with 500 and 2,000 pound bomb and Hellfire missile strikes. Throughout the course of the ten hour firefight, Captain Crawford braved effective enemy fire and consciously placed himself at grave risk on four occasions while controlling over 33 aircraft and more than 40 airstrikes on a well-trained and well-prepared enemy force. His selfless actions and expert airpower employment neutralized a numerically superior enemy force and enabled friendly elements to exfiltrate the area without massive casualties. Through his extraordinary heroism, superb airmanship, and aggressiveness in the face of the enemy, Captain Crawford has reflected the highest credit upon himself and the United States Air Force.