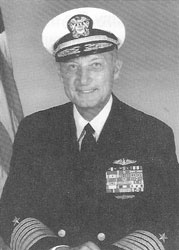 ADMIRAL BERNARD A. CLAREY, one of the Navy’s most highly decorated officers, was awarded three Navy Crosses for action as commanding officer of the submarine USS Pintado. The dates were 16 May – 1 Jul 44, 24 Jul – 14 Sep 44 and 9 Oct 44 – 1 Jan 45. Admiral Clarey graduated from the Naval Academy in 1934. His first assignment was aboard the cruiser Milwaukee. He completed submarine training in 1937 and was executive officer of the submarine Dolphin during the attack on Pearl Harbor on Dec 7, 1941. During WWII, he was executing officer of the submarine Amberjack and made four war patrols as commanding officer of the Pintado. He was executive officer of the heavy cruiser Helena during the Korean War. In July 1962, Admiral Clarey returned to Pearl Harbor as Commander, Submarine Force, U.S. Pacific Fleet. In 1968, he was appointed Vice Chief of Naval Operations and, in 1970, he assumed command of U.S. Pacific Fleet. He retired from the Navy in 1973 and lived in Hawaii until his death in 1996.