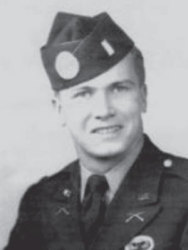 The President of the United States of America, under the provisions of the Act of Congress approved July 9, 1918, takes pride in presenting a Bronze Oak Leaf Cluster in lieu of a Second Award of the Distinguished Service Cross (Posthumously) to First Lieutenant (Armor) Charles E. Brannon, United States Army, for extraordinary heroism in connection with military operations against an armed enemy of the United Nations while serving with Company C. 1st Battalion, 5th Regimental Combat Team, attached to the 24th Infantry Division. First Lieutenant Brannon distinguished himself by extraordinary heroism in action against enemy aggressor forces in the vicinity of Sorak-san, Korea on 25 April 1951. When the convoy in which he was proceeding was ambushed by a heavily armed, well-entrenched enemy force, Lieutenant Brannon completely exposed himself to the intense hostile fire to place members of the convoy in defensive positions and direct their return fire. He then organized a group of soldiers and led an assault against the well- fortified enemy. Under his inspiring leadership, the small group inflicted heavy casualties on the hostile troops until the overwhelming numerical superiority of the enemy forced a withdrawal. As he was returning to the road, Lieutenant Brannon noticed that many wounded soldiers were lying in positions exposed to the murderous enemy fire. With utter disregard for his personal safety, he proceeded from one vehicle to another, trying to locate one that would start. During this courageous action he was shot in the neck but, although bleeding profusely, continued to check the vehicles until he located a two and one-half ton truck that was in operating condition. After driving to the area of the wounded men, he assisted in loading them on the vehicle. Then, when he had ascertained that all of the wounded were on the truck, he drove through the crossfire of the ambush to an aid station approximately six miles distant. Only after all other wounded were cared for did Lieutenant Brannon accept treatment for his own wound.