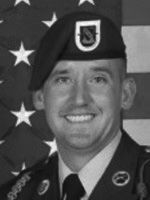 Charles E. Wyckoff, United States Army:  The President of the United States of America, authorized by Act of Congress, July 9, 1918 (amended by act of July 25, 1963), takes pride in presenting the  Distinguished Service Cross (Posthumously) to Sergeant Charles E. Wyckoff, United States Army, for extraordinary heroism in action while serving with the 3d Platoon, Company C, 1st Battalion, 508th Parachute Infantry Regiment, 3d Brigade Combat Team, 82d  Airborne  Division.   On 6 June 2007, Sergeant  Wyckoff  distinguished himself as a Rifle Team Leader in combat operations during Operation ENDURING FREEDOM. While engaged in close combat against determined enemy forces, Sergeant Wyckoff left his covered position without hesitation, to force the other members of his team to take cover.   Sergeant Wyckoff revealed his position and fatally engaged two insurgents to save the lives of his platoon. Sergeant Wycoff’s bravery is in keeping with the finest traditions of military service and reflects great credit upon himself, the 82d Airborne Division and the United States Army. 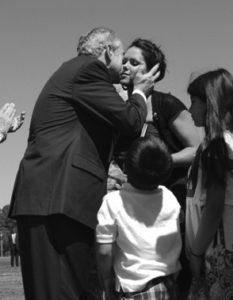 Wyckoff was born in 1979 in Chula Vista, CA.  He was killed in action in Afghanistan on June 6, 2007 and is buried in the Arlington National Cemetery.  President George W. Bush is shown comforting Wyckoff’s wife, Erika, and their two children during an 82d Airborne Division review on May 22, 2008 at Fort Bragg, NC after he presented the Distinguished Service Cross to her on behalf of her husband.