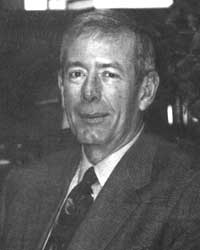 LIEUTENANT GENERAL CHARLES G. BOYD (then Captain), United States Air Force. Distinguished himself by extraordinary heroism in connection with military operations against an opposing armed force as a combat strike pilot in an F-105D Thunderchief approximately 35 miles northwest of Hanoi, North Vietnam, on 22 April 1966. On that date, Captain Boyd volunteered to participate in a flight with the mission of destroying Surface to Air Missile (SAM) Sites posing a threat to flights striking a bridge in the Phu Tho area. While attacking a hostile SAM site, Captain Boyd saw two missiles streak toward his aircraft. His superb airmanship and instant reaction enabled him to evade the missiles, which burst very near his aircraft. Without hesitation, Captain Boyd continued the attack on the hostile missile site. As he made a second pass through the intense flak which filled the sky around him, Captain Boyd’s aircraft received a direct hit by anti-aircraft fire and he was forced to eject himself in a heavily populated, hostile area. The selfless act of making repeated attacks through intense ground fire after barely avoiding two missiles was far beyond the normal call of duty. Through his extraordinary heroism, superb airmanship, and aggressiveness in the face of hostile forces, Captain Boyd reflected the highest credit upon himself and the United States Air Force.