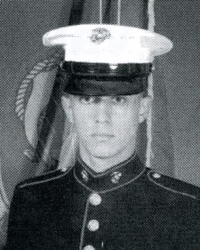 Christopher S. Adlesperger, United States Marine Corps: For extraordinary heroism while serving as a Rifleman, Company K, Third Battalion, Fifth Marines, Regimental Combat Team 1, FIRST Marino Division in support of Operation IRAQI FREEDOM on 10 November 2004. As Private First Class Adlesperger made entry into a house in the Jolan District of Al Fallujah, during Operation AL FAJR, his squad received a heavy volume of enemy machinegun fire from a well-prepared entrenched machine gun position. These fires instantly killed the point man, and injured another Marine and the platoon corpsman. Exposed to heavy enemy machine gun fire and grenades, Private First Class Adlesperger immediately attacked the enemy with rifle fire. While doing so, he suffered a fragmentation wound from enemy grenades. With the majority of his platoon pinned down by insurgent positions, Private First Class Adlesperger single-handedly cleared stairs and a rooftop to move the injured to a rooftop where they could receive medical attention. On his own initiative, while deliberately exposing himself to heavy enemy fire, he established a series of firing positions and attacked the enemy, forcing them to be destroyed in place or to move into an area where adjacent forces could engage them. Disregarding his own wounds and physical exhaustion, Private First Class Adlesperger rejoined his platoon and demanded to take the point for a fi al assault on the same machine gun position. Once an Assault Amphibian Vehicle created a breach in the wall adjacent to the enemy’s position, Private First Class. Adlesperger was the first Marine to re-enter the courtyard where he eliminated a remaining insurgent at close range. When the fighting finally ceased, a significant number of insurgents from fortified positions had been eradicated. Through his actions, Private First Class Adlesperhger destroyed the last strongpoint in the Jolan Districe of Al Fallujah, and saved the lives of his fellow Marines. By his outstanding display of decisive leadership, unlimited courage in the face of heavy enemy fire, and utmost devotion to duty, Private First Class Adlesperger reflected great credit upon himself and upheld the highest traditions of the Marine Corps and the United States Naval Service.

Chris, who hailed from Albuquerque, New Mexico was meritoriously promoted to Lance Corporal in a break between intense firefights in the battle for Fallujah. He died in combat one month later. On April 14, 2007 his mother Annette Griego and father Gary Adlesperger were in attendance at the awards ceremony presided over by Major General John Paxton, who commands the 1st Marine Division at Camp Pendleton.