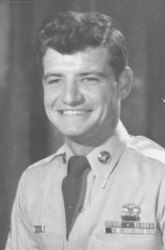 The President of the United States takes pleasure in presenting the Distinguished Service Cross to Don V. Bailey, Private First Class, U. S. Army for extraordinary heroism in connection with military operations against an armed enemy of the United Nations while serving with the Ambulance Company, 24th Medical Battalion, 24th Infantry Division. Private First Class Bailey distinguished himself by extraordinary heroism in action against enemy aggressor forces at Yongi, Korea, on 16 July 1950. Private First Class Bailey, an ambulance driver, was wounded while he was part of a group that was encircled and under extremely heavy enemy fire. Disregarding his wound, he continued to try and evacuate the wounded. His ambulance was destroyed by enemy fire and he then transferred the wounded to an armored vehicle. During this action he was wounded again, and the armored vehicle rendered inoperative. He then secured a jeep and loaded it with wounded and during this action he was wounded six times, rendering him helpless. Only then, would he allow himself to be evacuated. Headquarters, Eight U.S. Army, Korea: General Orders No. 27 (August 17, 1950).