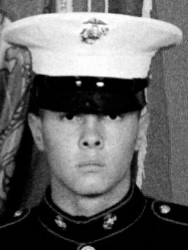 For conspicuous gallantry and intrepidity in action against the enemy while serving as Rifleman, 2nd Platoon, Company A, 1st Battalion, 5th Marines, Regimental Combat Team 7, Marine Expeditionary Brigade-Afghanistan, on Aug. 26 2009, in support of Operation Enduring Freedom. While on a dismounted patrol in Helmand province, Hogan’s squad came under attack from an enemy fighter attempting to command detonate a directional fragmentation Improvised Explosive Device. Hogan observed a kite string leading onto the road from an adjacent corn field being pulled taut in an attempt to activate the Improvised Explosive Device. Familiar with this common enemy tactic, Hogan immediately recognized that the attack was imminent and that he had only moments to react. Without hesitation, Hogan hurled his body into the nearest Marine in an effort to keep him from the effects of the imminent explosion. Hogan then turned in the direction of Improvised Explosive Device and placed himself in the road so that he could effectively yell verbal warnings to the rest of his squad-mates. This desperate effort to warn the rest of the patrol bought the remaining Marines valuable seconds to begin moving away from the Improvised Explosive Device before it detonated. Mortally wounded by the explosion, Hogan’s extreme act of selflessness saved a Marine’s life and allowed the rest of the squad to avoid the full brunt of the fragmentation from the Improvised Explosive Device. By his bold leadership, wise judgment, and complete dedication to duty, Hogan reflected great credit upon himself and upheld the highest traditions of the Marine Corps and the United States Naval Service.

Navy Secretary Ray Mabus said Hogan is “now part of a part of Marine lore along with the great heroes of the Corps” as he presented the Navy Cross to Hogan’s par-ents. The Secretary made these remarks in front of a new barracks at Camp Pendleton that will be named after Hogan, who was from nearby San Clemente, CA.