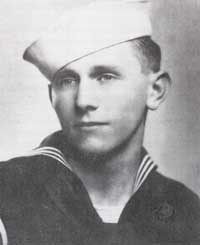 DOUGLAS ALBERT MUNRO, Signalman First Class, U.S.Coast Guard. For extraordinary heroism and conspicuous gallantry in action above and beyond the call of duty as Petty Officer in Charge of a group of 24 Higgins boats, engaged in the evacuation of a battalion of marines trapped by enemy forces at Point Cruz, Guadalcanal, on 27 September 1942. After making preliminary plans for the evacuation of nearly 500 beleaguered marines, Munro, under constant strafing by enemy machineguns on the island, and at great risk of his life, daringly led 5 of his small craft toward the shore. As he closed to the beach, he signaled the others to land, and then in order to draw the enemy’s fire and protect the heavily loaded boats, he valiantly placed his craft with its 2 small guns as a shield between the beachhead and the Japanese. When the perilous task of evacuation was nearly completed, Munro was instantly killed by enemy fire, but his crew, 2 of whom were wounded, carried on until the last boat had loaded and cleared the beach. By his outstanding leadership, expert planning, and dauntless devotion to duty, he and his courageous comrades undoubtedly saved the lives of many who otherwise would have perished. He gallantly gave his life for his country.