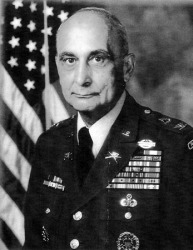 For extraordinary heroism in connection with military operations involving conflict with an armed hostile force in the Republic of Vietnam, while serving with Headquarters and Headquarters Company, 2d Battalion. 327th Infantry, 1st Brigade, 101st Airborne Division, Lieutenant Colonel Abood distinguished himself by exceptionally valorous actions on 13 August 1967 while serving as Commanding Officer of an airborne infantry battalion on an airmobile assault mission deep in hostile territory. During the assault, Colonel Abood flew low through heavy ground fire to mark the landing zone and direct air strikes on enemy positions. Several helicopters were shot down and his craft received numerous hits, but he continued to brave intense Viet Cong machine gun fire until all elements had landed. Once on the ground, he moved through sniper fire to designate defensive positions to his men, A smoke grenade set the dry elephant grass in the area ablaze, but he exposed himself time after time to withering volleys to organize fire- fighting teams and stop the approaching flames. A short time later enemy tracers started a fire around his artillery position on an adjacent hill. Completely ignoring machine gun fire and flying shrapnel, he moved to the position to direct evacuation of his men. He single-handedly rescued a man overcome by the heat and carried him to safety. Throughout the night he moved along the perimeter fully exposed to enemy fire to direct his men in repelling repeated hostile probes. Mortar round and rifle fire struck all around him, but he remained in the open encouraging his men. In the morning he directed infiltration operations of his men to a more secure area. Throughout the evacuation he constantly remained exposed to persistent sniper fire all around him. His courageous actions and leadership prevented loss of men or equipment to the insurgents. Lieutenant Colonel Abood‚Äôs extraordinary heroism and devotion to duty were in keeping with the highest traditions of the military service and reflect great credit upon himself, his unit, and the United States Army.