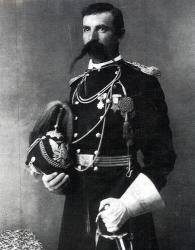 Captain EDWARD S. GODFREY,Began his military career with the 7th Cavalry in 1867, fought with Custer and Benteen during the Black Kettle-Washita Campaign of 1868, and participated in the Yellowstone and Black Hills

Expeditions of 1873-1874. He played a prominent part in the Little Bighorn affair and in 1877 was awarded the Medal of Honor for gallantry and leadership in battle against Chief Joseph’s Nez Perce on 30 September 1877 at Bear Paw Mountain, Montana. He led his command into action when he was severely wounded. He was present at Wounded Knee in 1890.

General Godfrey was nominated in 2005 for membership and sponsered by Legion of Valor Historian, Richard A. Sperling, DSC.