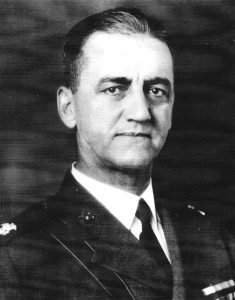 Eli Thompson Fryer, United States Marine Corps: For distinguished conduct in battle engagement of VERA CRUZ, April 21st and 22nd, 1914. Was in both days fighting at the head of his company and was eminent and conspicuous in his conduct, leading his men with skill and courage.
Fryer was born in Hightstown, NJ on 22 August 1878. He died in Coral Gables, FL on 6 June 1963 and is buried in the Arlington National Cemetery. His membership is sponsored by his grand-nephew, Kenneth D. Fryer, from Louisville, KY. Ken as well as Eli served in the First Marine Regiment; Eli served as the Commanding Officer after WWI and Ken during his tour in Vietnam.