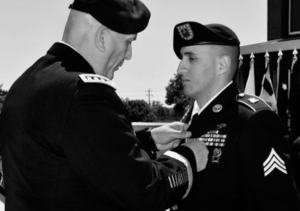 Felipe V. Pereira, United States Army: Distinguished himself by acts of gallantry and intrepidity above and beyond the call of duty while serving as a Team Leader with Company A, 1st Battalion, 502d Infantry Regiment, 101st Airborne Division (Air Assault) during combat operations against an armed enemy in Kandahar Province, Afghanistan on 1 November 2010. His dedication and commitment to duty undoubtedly saved the lives of two of his fellow Soldiers, while his leadership and distinguished service were instrumental in his unit’s successful response to a lethal attack. Specialist Pereira’s actions in the face of adversity and a determined enemy are in keeping with the finest traditions of military service and reflect great credit upon himself, 1st Battalion, 502d Infantry Regiment, 101st Airborne Division (Air Assault) and the United States Army.

The above citation does not due justice to Pereira’s heroic actions after a suicide motorcycle borne device was detonated in the middle of his squad. Two Soldiers were instantly killed and four were severely wounded. Sgt Pereira, although sustaining shrapnel wounds to his spleen, liver and left lung, used an all-terrain vehicle,on multiple trips, to save the rest of the squad while under continuous enemy fire.

Pereira was born in Brazil and moved to the United States at age 17 to attend college. He enlisted in the Army in 2009 after receiving his college degree and became a US citizen in 2010. The above picture shows him receiving the DSC from the Army Chief of Staff, General Raymond T. Odiemo. He currently resides in Hermitage, TN.