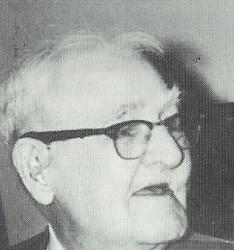 Captain Staples, DSC, (RET) U.S. Soldiers and Airmen’s Home, Washington, D.C. 20315, who was ultimately granted the Distinguished Service Cross for his distinguished gallantry in the assault on Fort Pitacus, Lake Lanoa, Philippine Islands in May, 1903. As a member of the 27th Infantry (he enlisted in 1898). Companion Staples’ recognition at the time was the Certificate of Merit signed by President Theodore Roosevelt. This oldest of U.S. Army awards was discontinued in 1918 and recipients were authorized by Congress to claim the Distinguished Service Medal. Congress later amended this legislation to provide the Distinguished Service Cross for holders of the Certificate of Merit. Captain Staples is one of the few who have gone through all stages of this system, receiving his DSC in 1933. He retired from the Army in 1926 at the age of 91. Captain Staples, who also served as a Post Quartermaster Sergeant, is beleived to be the senior holder of the Certificate of Merit.