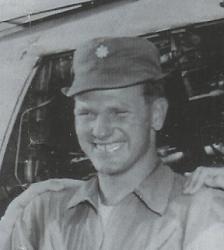 Frederick C. Blesse, DSC: For conspicuous gallantry in action against an armed enemy of the United Nations as a pilot, 4th Fighter-Interceptor Wing, Fifth Air Force, on 8 September 1952. Leading a flight of four F-86s protecting fighter bombers from possible attack by enemy MIGs, Major Blesse positioned his flight for an attack on four sighted MIGs. Singling out one of the MIGs, Major Blesse followed it up into an overcast and broke out between layers of clouds. As the two aircraft emerged from the clouds, Major Blesse was still in position, so he closed and fired, causing the MIG to burst into flames and the pilot to eject himself. Major Blesse then sighted a lone MIG, and positioned himself for another attack. The MIG began violent, evasive maneuvers, but through superior airmanship Major Blesse scored hits, causing the MIG to snap and spin. Major Blesse followed closely until the MIG recovered. He then scored hits wth another long burst which caused the pilot to eject himself. Through his courage, keen flying ability and devotion to duty, Major Blesse reflected great credit upon himself, the Far East Air Force, and the United States Air Force.

Fred “Boots” Blesse is also the author of “Check Six” A Fighter Pilot Looks Back. He joined the Legion of Valor as a life member in 2003 and currently lives in Florida. By the end of the Korean War, “Boots” was credited with 10 kills.