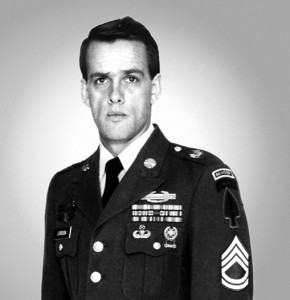 Distinguished himself by actions above and beyond the call of duty on 3 October 1993, while serving as Sniper Team Leader, United States Army Special Operations Command with Task Force Ranger in Mogadishu, Somalia. Master Sergeant Gordon’s sniper team provided precision fires from the lead helicopter during an assault, and at two helicopter crash sites, while subjected to intense automatic weapons and rocket propelled grenade fires. When Sergeant Gordon learned that ground forces were not immediately available to secure the second crash site, he and another sniper unhesitatingly volunteered to be inserted to protect the four critically wounded personnel, despite being well aware of the growing number of enemy personnel closing in on the site. After his third request to be inserted, Sergeant Gordon received permission to perform his volunteer mission. When debris and enemy ground fires at the site caused them to abort the first attempt, Sergeant Gordon was inserted one hundred meters south of the crash site. Equipped with only his sniper rifle and a pistol, Sergeant Gordon and his fellow sniper, while under intense small arms fire from the enemy, fought their way through a dense maze of shanties and shacks to reach the critically injured crew members. Sergeant Gordon immediately pulled the pilot and the other crew members from the aircraft, establishing a perimeter which placed him and his fellow sniper in the most vulnerable position. Sergeant Gordon used his long range rifle and side arm to kill an undetermined number of attackers until he depleted his ammunition. Sergeant Gordon then went back to the wreckage, recovering some of the crew’s weapons and ammunition. Despite the fact that he was critically low on ammunition he provided some of it to the dazed pilot and then radioed for help. Sergeant Gordon continued to travel the perimeter, protecting the downed crew. After his team member was fatally wounded, and his own rifle ammunition exhausted, Sergeant Gordon returned to the wreckage, recovering a rifle with the last five rounds of ammunition and gave it to the pilot with the words “good luck.” Then, armed only with his pistol, Sergeant Gordon continued to fight until he was fatally wounded. His actions saved the pilot’s life. Sergeant Gordon’s extraordinary heroism and devotion to duty were in keeping with the highest standards of military service and reflect great credit upon him, his unit and the United States Army.