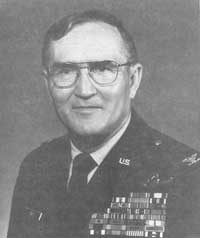 COLONEL GEORGE E. DAY (then Major), U.S. Air Force, Forward Air Controller Pilot of an F-100 aircraft, On 26 August 1967, Col. Day was forced to eject from his aircraft over North Vietnam when it was hit by ground fire. His right arm was broken in 3 places, and his left knee was badly sprained. He was immediately captured by hostile forces and taken to a prison camp where he was interrogated and severely tortured. After causing the guards to relax their vigilance, Col. Day escaped into the jungle and began the trek toward South Vietnam. Despite injuries inflicted by fragments or a bomb or rocket, he continued southward surviving only on a few berries and uncooked frogs. He successfully evaded enemy patrols and reached the Ben Hai River, where he encountered U.S. Artillery barrages. With the aid of a bamboo log float, Col Day swam across the river and entered the demilitarized zone. Due to delirium, he lost his sense of direction and wandered aimlessly for several days. After several unsuccessful attempts to signal U.S. aircraft, he was ambushed and captured by the Viet Cong, sustaining gunshot wounds to his left hand and thigh. He was returned to the prison from which he had escaped and later was moved to Hanoi after giving his captors false information to questions put before him. Physically, Col. Day was totally debilitated and unable to perform even in the simplest task for himself. Despite his many injuries, he continued to offer maximum resistance. His personal bravery in the face of deadly enemy pressure was significant in saving the lives of fellow aviators who were still flying against the enemy. Col. Day’s conspicuous gallantry and intrepidity at the risk of his life above and beyond the call of duty are in keeping with the highest traditions of the U.S. Air Force and reflect great credit upon himself and the U.S. Armed Forces.