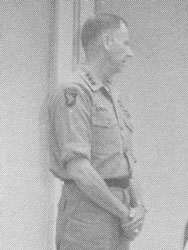 LTG. Emerson’s second award of the Distinguished Service Cross came as the result of his exceptionally valorous actions from 30 May to 4 June 1968 again while leading his brigade against the Viet Cong. Two days of ground sweeps failed to uncover the communists. Colonel Emerson boarded his helicopter on 1 June and directed that he be taken ona low-level reconnaissance through the operation area. He located a Viet Cong base camp and ordered an air assault against it. Ignoring heavy antiaircraft fire which was directed at and struck his ship, he circled above the battle area at less than three hundred feet and called air strikes on the enemy. Frequently he landed to personally direct the maneuver of his troops. As evening came a severe thunderstorm lashed the battle site, but he stayed in the air until he was told that his craft was flying on emergency fuel. During the night the enemy units fled, and although Colonel Emerson located their escape route the next day, they disappeared before his troops could re-engage them. Flying at tree-top level on 3 June, he discovered a massive Viet Cong bunker complex and immediately committed his forces in a series of air assaults. His men came under devastating automatic weapons fire, and by late afternoon the situation was critical. By landing at strategic points in the midst of the enemy fusillade and repeatedly flying low over the communists’ positions, Colonel Emerson was able to skillfully coordinate his troops’ maneuvers and direct air and artillery bombardments on the hostile emplacements. As he conducted a bitter night assault which completely encircled the Viet Cong, his helicopter was hit six times by enemy machine gun fire and disabled. After landing to obtain another ship and a fresh crew he returned to the fight, staying with his men until long after midnight to insure that the wounded were evacuated, all units were resupplied and arrangements were made for continued air and artillery strikes. The struggle ended the next morning and two first line Viet Cong battalions had been shattered. General Emerson’s heroism and devotion to duty are in keeping with the highest traditions of the military service and reflect great credit on him and on the U.S. Army.