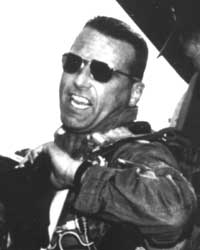 COLONEL JACKSEL M. BROUGHTON distinguished himself by extraordinary heroism in connection with military operations against an opposing armed force in Southeast Asia on 5 February 1967. On that date, Colonel Broughton was Mission Commander of a flight of a two wing F-105 Thunderchief strike force which attacked a heavily defended target in North Vietnam. Despite serious aircraft malfunctions, marginal weather, and grave damage to his aircraft from an exploding surface-to-air missile, he placed his armament directly on target, scattering fire and debris which illuminated the target for easy acquisition by the following strike force. Disregarding the crippled condition of his aircraft, which minimized his chances for recovery to friendly territory, Colonel Broughton then willfully acted as a decoy to divert hostile aircraft approaching the strike force. Through his extraordinary heroism, superb airmanship, and aggressiveness in the face of the enemy, Colonel Broughton reflected the highest credit upon himself and the United States Air Force.