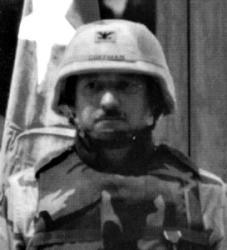 Colonel JAMES H. COFFMAN, JR., United States Army: For exceptionally valorous conduct on November 14, 2004 as the Senior Advisor to the 1st Iraqi Special Police Commando Brigade during a lengthy battle in Mosul, Iraq, in which the unit likely would have been overrun were it not for the courageous leadership of Col Coffman. At approximately 1030 Hours on 14 November, Col Coffman moved with a Commando Quick Reaction Force to reinforce a Commando Platoon under attack at the Four West Police Station in Mosul. As the QRF neared the besieged platoon, it came under intense rocket-propelled grenade, mortar, machinegun, and AK-47 fire by a large insurgent force. Over the next four hours, the enemy repeately assaulted the commandos’ position, at times culminating their attacks twenty meters from Col Coffman’s location. With all but one of the commando officers killed or wounded, Col Coffman exhibited truly inspirational leadership, rallying the commandos and organizing a hasty defense. Under heavy fire, he moved from commando to commando, looking each in the eye and using hand and arm signals to demonstrate what he wanted done. At one point, an enemy round shattered Col Coffman’s shooting hand and rendered his rifle inoperable. After bandaging his hand, Col Coffman picked up AK-47’s from commando casualties and fired them with his other hand until each ran out of ammunition. With the assistance of the one remaining commando officer, Col Coffman redistributed ammunition among the uninjured commandos. He then loaded the loose amunition left by placing magazines between his legs and using his one working hand. Throughout this period he repeatedly demonstrated exceptional courage and an extaordinary example to the commandos as they repulsed attack after attack by the enemy. Four hours after the start of the battle, a second commando element arrived and Col Coffman guided them to his position. Even after their arrival, he continued to direct the fight, refusing to be evacuated until the enemy was defeated. Shortly thereafter, attack helicopters also arrived, followed closely by a Stryker Brigade QRF. Col Coffman helped direct air strikes and provided vital information on the location of enemy and friendly forces. After supervising the evacuation of several dozen wounded commandos, Col Coffman led a squad-sized element to the Four West Police Station to make contact with the commandos there. The Strykers then moved forward, and attack helicopters engaged the buildings occupied by the enemy, following which Col Coffman returned to his original position to ensure that all of the Iraqi casualties had been evacuated. Only then did he consent to be evacuated for his own serious wound.

During the fierce four-hour battle, 12 Commandos were killed and 42 were wounded. 25 enemy were killed and many dozens more were wounded. The personal courage displayed throughout the fight by Col Coffman, in the face of heavy enemy fire and repeated attacks, was absolutely critical to defeating the enemy force and to saving Iraqi lives. Col Coffman’s galantry in action was in keeping with the finest traditions of the American Military and reflects great credit on him, the Multinational Force-Iraq, the U. S. Special Operations Command, and the United States of America.

Colonel Coffman joined the Legion of Valor in 2005 as a LIFE MEMBER and resides in Virginia.