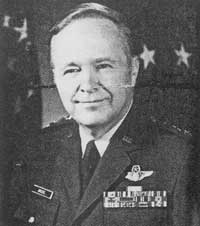 LIEUTENANT GENERAL JAMES R. BRICKEL, (then Lieutenant Colonel), United States Air Force. For extraordinary heroism in connection with military operations against an opposing armed force as a photo reconnaissance pilot near Thai Nguyen, North Vietnam, on 10 March 1967. On that date, Colonel Brickel led a flight of two RF-101C photo reconnaissance aircraft on a bomb damage assessment mission against one of the most highly defended targets in North Vietnam. Despite a direct hit by an anti-aircraft artillery flak that extensively damaged his aircraft, Colonel Brickel continued to the target and acquired one hundred percent photographic coverage. He then made a successful withdrawal from hostile territory on a single engine and landed at his home base.

General Brickel resides in Virginia and is a LIFE MEMBER of the Legion of Valor.