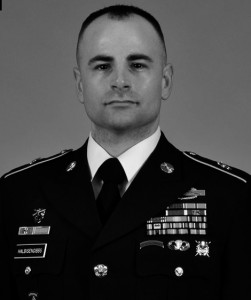 Operational Detachment Alpha 083, Advanced Operating Base 080, Combined Joint Special Operations Task Force – Arabian Peninsula distinguished himself on 10 September 2007 in combat operations in support of Operation Iraqi Freedom. As the Detachment Weapons Sergeant, Staff Sergeant Halbisengibbs displayed extraordinary courage under fire while combat-advising a combined assault element of the Iraqi National Police during Operation Chromium, a raid to capture Al Qaeda in Iraq’s Minister of Defense for Ad Din Province in the Samarra. Through his fearless actions, Staff Sergeant Halbisengibbs directly saved the lives of two of his fellow soldiers, personally killed six of the eleven enemy Killed in Action, enabled the rescue of one hostage, and ensured the elimination of a terrorist responsible for kidnappings and murders throughout the Samarra region. His unparalleled courage under fire, decisive leadership and personal sacrifice were directly responsible for the operation’s success and ensured the province of Ad Din did not fall into insurgent hands. Staff Sergeant Jarion Halbisengibbs’ outstanding performance of duty is in keeping with the finest traditions of military service and reflects great credit upon himself, the 10th Special Forces Group (Airborne) and the Ulnited States Army.

Jarion Halbisengibbs presently lives in Colorado Springs, CO. He was sponsored for membership in the Legion of Valor by Ruth and Jim Kunkle, DSC from Santa Ynez, CA.