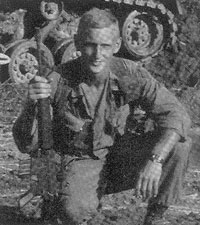 JOE V. ABERNATHY, 1LT Infantry USA, Company B, 1st Battalion, 61st Infantry, 1st Infantry Brigade, 5th Infantry Division. For extraordinary heroism with an armed hostile force in the Republic of Vietnam. 1st Lt Abernathy distinguished himself by exceptionally valorous actions on 25 October 1968 while serving as platoon leader on a battalion search and clear mission in enemy held territory of nothern I Corps. One of the companies encountered a formidable maze of enemy fortifications scattered among hedgerows and bamboo thickets. The enemy initiated a massive attack which pinned down the unit. In an effort to relieve the imperiled and hard-pressed company, Lieutenant Abernathy led his platoon in a charge up a steep hill, overrunning three motor installations. During his assault, he personnally shot and killed three North Vietnamese at point-blank range. Reconsolidating his platoon, he pressed on, covering two hundred meters before severe strafing fire deterred his advance. A quick evaluation revealed a well-camouflaged battlement from which the automatic weapon salvos erupted. He immediately directed the firing of a light antitank weapon on the position. Then braving hazardous barrages and sniper fire, he and two other men assaulted and overpowered the bunker. First Lieutenant Abernathy’s extraordinary heroism and devotion to duty were in keeping with the highest traditions of the military service and reflect great credit upon himself, his unit, and the United States Army.

Mr. Abernathy joined the Legion of Valor in 2003 and resides in Texas.