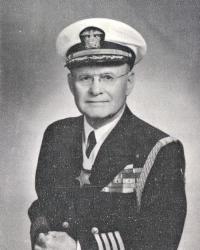 CAPT JOHN DAVIS, Gunner’s Mate Third Class, U.S. Navy. While on board the U.S.S. Marblehead at Cienfuegos, Cuba on 11 May 1898, during the operation of cutting the cable leading from the Cienfuegos, Cuba. Facing the heavy fire from the enemy, Davis set an example of extraordinary bravery and coolness throughout this action.