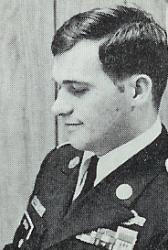 SERGEANT JOHN F. BAKER (then Pfc.) U.S. Army, Company A, 2d Battalion, 27th Infantry, 25th Infantry Division, Republic of Vietnam, 5 November 1966, for conspicuous gallantry and intrepidity in action at the risk of his life above and beyond the call of duty. En route to assist another unit that was engaged with the enemy, Company A came under intense enemy fire and the lead man was killed instantly. Sgt. Baker immediately moved to the head of the column and together with another soldier knocked out 2 enemy bunkers. When his comrade was mortally wounded, Sgt. Baker, spotting 4 Viet Cong snipers, killed all of them, evacuated the fallen soldier and returned to lead repeated assaults against the enemy positions, killing several more Viet Cong. Moving to attack 2 additional enemy bunkers, he and another soldier drew intense enemy fire and Sgt. Baker was blown from his feet by an enemy grenade. He quickly recovered and single-handedly destroyed 1 bunker before the other soldier was wounded. Seizing his fallen comrade’s machine gun, Sgt. Baker charged through the deadly fusillade to silence the other bunker. He evacuated his comrade, replenished his ammunition and returned to the forefront to brave the enemy fire and continue the fight. When the forward element was ordered to withdraw, he carried 1 wounded man to the rear. As he returned to evacuate another soldier, he was taken under fire by snipers, but raced beyond the friendly troops to attack and kill the snipers. After evacuating the wounded man, he returned to cover the deployment of the unit. His ammunition now exhausted, he dragged 2 more of his fallen comrades to the rear. Sgt. Baker’s selfless heroism, indomitable fighting spirit, and extraordinary gallantry were directly responsible for saving the lives of several of his comrades, and inflicting serious damage on the enemy. His acts were in keeping with the highest traditions of the U.S. Army and reflect great credit upon himself and the Armed Forces of his country.

MSG Baker is a life member and resided in South Carolina.