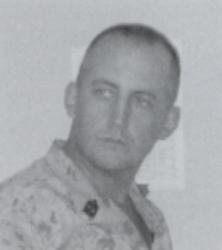 FIRST SERGEANT JUSTIN D. LEHEW For extraordinary heroism as Amphibious Assault Platoon Sergeant, Company A, 1st Battalion, 2d Marines, Task Force Tarawa, 1st Marine Expeditionary Force in support of Operation IRAQI FREEDOM on 23 and 24 March 2003. As Regimental Combat Team 2 attacked north towards An Nasiriyah, Iraq, lead elements of the Battalion came under heavy enemy fire. When beleaguered United States Army 507th Maintenance Company convoy was spotted in the distance, Gunnery Sergeant Lehew and his crew were dispatched to rescue the soldiers. Under constant enemy fire, he led the rescue team to the soldiers. With total disregard for his own welfare, he assisted the evacuation effort of four soldiers, two of whom were critically wounded. While still receiving enemy fire, he climbed back into his vehicle and immediately began suppressing enemy infantry. During the subsequent company attack on the eastern bridge over the Euphrates River, Gunnery Sergeant Lehew continuously exposed himself to withering enemy fire during the three-hour urban firefight. His courageous battlefield presence inspired his Marines to fight a determined foe and allowed him to position his platoon’s heavy machine guns to repel numerous waves of attackers. In the midst of the battle, an Amphibious Assault Vehicle was destroyed, killing or wounding all its occupants. Gunnery Sergeant Lehew immediately moved to recover the nine Marines. He again exposed himself to a barrage of fire as he worked for nearly an hour recovering casualties from the wreckage. By his outstanding display of decisive leadership, unlimited courage in the face of heavy enemy fire, and utmost devotion to duty, Gunnery Sergeant Lehew reflected great credit upon himself and upheld the highest traditions of the Marine Corps and the United States Naval Service.

First Sergeant Lehew joined the L.O.V. in 2004 and resides in Southern California.