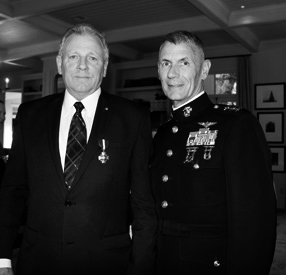 For extraordinary heroism while serving with Marine Medium Helicopter Squadron 364, Marine Aircraft Group Sixteen, First Marine Aircraft Wing in the Republic of Vietnam. On 9 May 1969 Sergeant Altazan was the crew chief of a CH-46 conducting emergency medical evacuation for a Marine infantry company pinned down by a large enemy force. Five separate landings were needed to reach all the casualties. Undaunted by the heavy volume of fire directed at his helicopter, Sergeant Altazan went from window to window identifying obstacles and enemy positions, expertly guiding his pilot into the zone. Observing a casualty in the open who could no longer move on his own, Sergeant Altazan boldly leaped from his helicopter, ran to the side of the wounded man and lifted him onto his shoulders. He fearlessly carried the Marine back across fire swept terrain toward his CH-46, while simultaneously assisting another evacuee through the perilous open area. When a round struck the man he was carrying, Sergeant Altazan fell and severely injured his knee. Disregarding the excruciating pain, he regained his feet, picked up the man and carried him into the helicopter. At the final pickup location, Sergeant Altazan observed other casualties signaling for help. Despite his own injury, and once again disregarding his own safety, he exited the CH-46, ran 30 meters toward the enemy occupied tree line to reach the Marines, and then assisted them back to the helicopter. By his decisive actions, bold initiative, and complete dedication to duty, Sergeant Altazan reflected great credit upon himself and upheld the highest traditions of the Marine Corps and the United States Naval Service.

The Navy Cross, upgraded from a Silver Star, was presented to Altazan on 13 Oct 2015 by Lieutenant General Rex C. McMillian, USMC, Commander, Marine Forces Reserve. The upgrade happend only with the total support of Joseph Patrick Donovan, NC, who was his pilot on 9 May 1969 (Mission 5 Mike), and the other members of “The Purple Foxes” of HMM-364 and VMM-364. Altazan currently lives with his wife Marcy in Baton Rouge, Louisiana.