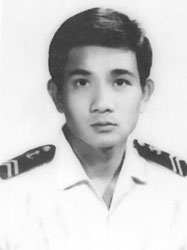 KIET VAN NGUYEN, Petty Officer Third Class. Republic of Vietnam Navy. For extraordinary heroism while serving with friendly forces engaged in armed conflict against the North Vietnamese and Viet Cong communist aggressors in the Republic of Vietnam. On 13 April 1972, Petty Officer Nguyen participated in an unprecedented recovery operation for a downed United States aviator behind enemy lines in Quang Tri Province, Republic of Vietnam. He courageously volunteered to accompany a United States SEAL Advisor in an extremely hazardous attempt to reach the aviator, who was physically unable to move toward friendly positions. Using a sampan and traveling throughout the night, they silently made their way deep into enemy territory, past numerous enemy positions, locating the pilot at dawn. Once, after being spotted by a North Vietnamese patrol, he calmly continued to keep the enemy confused as the small party successfully evaded the patrol. Later, they were suddenly under heavy machine gun fire. Thinking first of the pilot, he quickly pulled the sampan to safety behind a bank and camouflaged it while the air strikes were called on the enemy position. Due to Petty Officer Nguyen’s coolness under extremely dangerous conditions and his outstanding courage and professionalism, an American aviator was recovered after an eleven-day ordeal behind enemy lines. His self-discipline, personal courage, and dynamic fighting spirit were an inspiration to all, thereby reflecting great credit upon himself and the Naval Service.

NOTE: Mr. Kiet Van Nguyen is the only Vietnamese national to receive the Navy Cross for actions during the Vietnam War.

Mr. Nguyen is a life member and resides in Washington State.