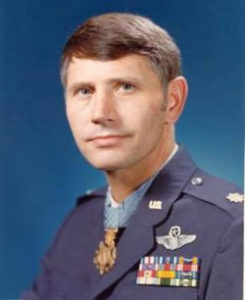 For conspicuous gallantry and intrepidity in ac?on at the risk of his life above and beyond the call of duty. As pilot of an F‐ 105 aircraft, Lt. Col. Thorsness was on a surface‐to‐air missile suppression mission over North Vietnam. Lt. Col. Thorsness and his wingman attacked and silenced a surface‐to‐air missile site with air‐to‐ground missiles, and then destroyed a second surface‐to‐air missile site with bombs. In the attack on the second missile site, Lt. Col. Thorsness’ wingman was shot down by intensive antiaircraft ﬁre, and the 2 crewmembers abandoned their aircraft. Lt. Col. Thorsness circled the descending parachutes to keep the crewmembers in sight and relay their position to the Search and Rescue Center. During this maneuver, a MIG‐17 was sighted in the area. Lt. Col. Thorsness immediately initiated an attack and destroyed the MIG. Because his aircraft was low on fuel, he was forced to depart the area in search of a tanker. Upon being ad‐vised that 2 helicopters were orbiting over the downed crew’s position and that there were hostile MlGs in the area posing a serious threat to the helicopters, Lt. Col. Thorsness, despite his low fuel condition, decided to return alone through a hostile environment of surface‐to‐air missile and antiaircraft defenses to the downed crew’s position. As he approached the area, he spotted 4 MIG‐17 aircraft and immediately initiated an attack on the MIGs, damaging 1 and driving the others away from the rescue scene. When it be‐came apparent that an aircraft in the area was critically low on fuel and the crew would have to abandon the aircraft unless they could reach a tanker, Lt. Col. Thorsness, although critically short on fuel himself, helped to avert further possible loss of life and a friendly aircraft by recovering at a forward operating base, thus allowing the aircraft in emergency fuel condition to re‐fuel safely. Lt. Col. Thorsness’ extraordinary heroism, self‐sacriﬁce, and personal bravery involving conspicuous risk of life were in the highest traditions of the military service, and have reﬂected great credit upon himself and the U.S. Air Force.