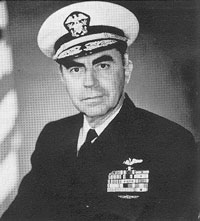 REAR ADMIRAL LEWIS S. PARKS, USN, accounts for three awards of the Navy Cross. A graduate of the U.S. Naval Academy, Admiral Parks was a lieutenant commander on 12 April 1939 when he reported aboard USS POMPANO as Commanding Officer. Detached from POMPANO, he served from 1942 to 1943 on the staff of Commander Submarines, U.S. Atlantic Fleet. Returning to the Pacific on November 9, 1943, he assumed command of Submarine Division Two Hundred Two and while in that assignment, served also as Commander, Submarine Coordinated Attack Group No. 9 (Wolf Pack), in U.S.S. PARCHE, flagship. For extraordinary heroism in that commmand during operations against enemy Japanese shipping off the Luzon Straits and in the South China Sea, he was awarded a Gold Star in lieu of a third Navy Cross for the success of attacks in which seven enemy ships and two armed patrol craft totaling 57,000 tons were sunk and five additional enemy ships totaling 33,930 tons were damaged in the face of severe enemy countermeasures.