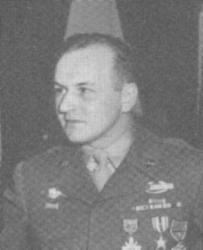 Technical Sergeant LLEWELLYN M. CHILSON for extraordinary heroism in action, as Platoon Sergeant, Company G 179th Infantry Regiment, 45th Infantry Division, on 26 March 1945. During the crossing of the Rhine River near Gernsheim, Germany, Technical Sergeant Chilson distinguished himself by his coolness, bravery, and aggressiveness. When the leader of the Second Platoon, the assault platoon of the company, was wounded, he, by his own initiative, assumed command and quickly organized the platoon into a compact, efficient assault force and with vigor and keen judgment led his force along the river bank. Despite heavy and intense enemy fire of all types and all calibers, he, because of his exceptional self-sacrifice and disregard of his personal safety, performed outstandingly intrepid actions, resulting in the death of eleven enemy soldiers and in the capture of a total of two hundred and twenty-five prisoners. In addition, Technical Sergeant Chilson personally destroyed an ammunition vehicle and two heavy machine guns and made possible the capture of two other heavy machine guns and the destruction of three enemy flak vehicles. The brilliant and exemplary leadership and superior devotion to duty which characterized his accomplishments, contributed directly to the company’s combat success and reflect the highest credit upon himself and the armed forces of the United States.

TSGT. Chilson was sponsored by Mr. Chris Profota, Curator at the Military and Space Museum in Houston, Texas. Mr. Profota felt that, even though Chilson died on 2 October 1981, he belonged in the Legion of Valor based on possibly being awarded more medals at one time for valor than any other soldier in the history of this great country. Chilson’s other medals for this time frame included the Silver Star ( First Oak Leaf Cluster), Legion of Merit, Bronze Star (First Oak Leaf Cluster) and the Purple Heart (First Oak Leaf Cluster).