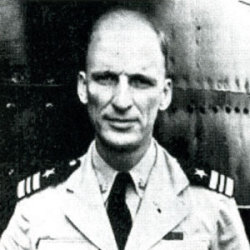 For heroism and distinguished service in the line of his profession as Commanding Officer of the U.S.S. Grunion (SS-216). Lieutenant Commander Abele conducted an aggressive and successful submarine war patrol from 30 June 1942 to 24 July 1942. He pressed home all attacks in such a skillful and resolute manner that he attacked and sank in one day, three enemy destroyers of the Towlekju Class. Despite severe anti-submarine measures, he brought his ship safely through these counter attacks but was subsequently lost from an unknown cause. He gallantly gave his life in the service of his country. His courage and devotion to duty were in keeping with the highest traditions of the Naval Service.

In 2006, the mangled remains of a vessel were found in the Bering Sea and it is likely the U.S.S. Grunion which disappeared with a crew of 70 near Kiska Island at the tip of

The sub lies 1,000 feet below the surface and had been crushed by water pressure. The hull had imploded so severely that the interior, including bunks and a dive wheel, were clearly visible. No human remains were found.

The Grunion patrolled the Aleutian area during WWII. Her last message was sent on July 30, 1942 describing heavy enemy activity at Kiska Harbor. That month the sub sunk two Japanese submarine chasers and heavily damaged a third near Kiska, one ot two islands in the Aleutians captured by the Japanese. A forensic engineer and other experts will piece together the Grunion’s final hours and figure out what caused it to sink. “Actually seeing the burial site was touching and in a way rewarding,” John Abele said. “It provides a closing and hopefully an answer to the unknown.” Relatives of 69 men are following the progress, said Mary Bentz, whose uncle died on the Grunion. She said the news is a relief after decades of not knowing what happened. This story was made known to me by John Brennan, our Judge Advocate.