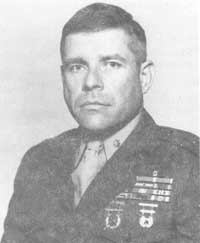 LIEUTENANT COLONEL MARTIN L. BRANDTNER, on 11 September 1968, when assigned a mission to conduct a search and destroy operation near the village of My Binh, Quang Dia Loc District, Quang Nam Province, Captain Brandtner selected his defensive position and began deploying his platoons for their assigned night activities. As the First Platoon departed, en route to their night ambush site, they began receiving intense small arms, automatic weapons and rocket fire from a numerically superior North Vietnamese Army force. Simultaneously, the enemy approximately the size of two North Vietnamese Army companies, began an attack on the Command Group with 82mm mortars, intense automatic weapons fire and B40 rockets. Quickly analyzing the situation and immediately realizing the seriousness and the danger involved, Captain Brandtner disregarded his own personal safety and moved forward to an extremely exposed position in order that he could personally control the battle at hand. When an enemy began the first of a series of ‘human wave’ sapper attacks against the company’s position, he calmly and with outstanding presence of mind moved from position to position reorganizing, encouraging and rallying his outnumbered and dazed company into an inspired fighting unit which completely stopped the momentum of the enemy attack and forced them to withdraw. Realizing the enemy were regrouping for subsequent attacks, he calmly adjusted his supporting artillery fire to within 200 meters of his lines, again raising havoc and confusion within the enemy’s ranks. When the North Vietnamese Army units began their second attack, the devastating fires of the well organized Marine Corps rifle company caught them off balance and inflicted heavy enemy casualties. Twice more, the determined enemy launched massive ‘human wave’ assaults on the perimeter of Company D, but the steadfast efforts of the men of the company proved to be too much for the now overwhelmed and demoralized enemy. After more than two hours of persistent attempts to overrun the company, the enemy broke contact. Daylight revealed 67 North Vietnamese dead as mute testimony to the ferocious encounter that had taken place. The number of enemy dead and wounded evacuated could not be estimated. Company D suffered only one Marine killed and fourteen with wounds serious enough to require evacuation. By his outstanding courage, superb leadership and unswerving devotion to duty, Captain Brandtner served to inspire all who observed him and upheld the highest traditions of the Marine Corps and the United States Naval Service.