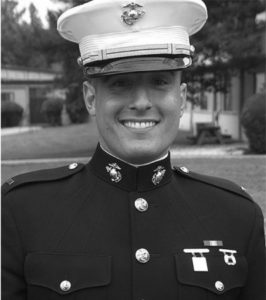 Matthew P. Manoukian, United States Marine Corps: The President of the United States of America, authorized by Act of Congress July 9, 1918, takes pride in presenting the Navy Cross (Posthumously) to Captain Matthew P. Manoukian, United States Marine Corps, for extraordinary heroism while serving as Team Leader, Marine Special Operations Team 8133, First Marine Special Operations Battalion, U.S. Marine Corps Forces Special Operations Command, in support of Operation ENDURING FREEDOM. While conducting village stability operations in Helmand Province on 10 August 2012, the Marine Tactical Operations Center came under automatic small arms fire from a rogue Afghan uniformed policeman attacking from inside the perimeter. After mortally wounding one Marine outside the entrance, the gunman unleashed a barrage of AK-47 fire that ripped through the plywood walls and partitions of the Tactical Operations Center. He then burst through the door and engaged two Marines who had begun maneuvering out of the room. Located in the far corner of the room, Captain Manoukian drew his pistol and, in the face of near certain death, engaged the attacker while commanding his Marines to maneuver to safety. With one of the two Marines now critically wounded, Captain Manoukian courageously drew heavy fire upon himself, and continued to engage the enemy until he fell mortally wounded from the shooter’s overwhelming fire. His heroic and selfless actions assisted in halting the gunman’s assault and forcing him to withdraw, enabling his Marines to survive. By his decisive and selfless actions, bold initiative, and complete dedication to duty, Captain Manoukian reflected great credit upon himself and upheld the highest traditions of the Marine Corps and of the United States Naval Service.

Manoukian grew up and is buried in Los Altos Hills, CA. He was fluent in Arabic and was on his fourth tour in Afghanistan when he was killed on August 10, 2012 by an Afghan police officer after having lunch with him.