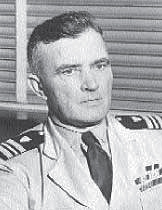 Maurice D. Jester, United States Coast Guard: For extraordinary heroism and distinguished service in the line of his profession as Commanding Officer of the U.S.S. ICARUS (WPC-110) during a successful action on 9 May 1942, with a German submarine. The conduct of Lieutenant Commander Jester throughout this action reflects great credit upon himself, and was in keeping with the highest traditions of the United States Naval Service.

Maurice Jester enlisted in the Coast Guard as a Surfman in 1917, working his way up to Chief Boatswain’s Mate by 1935 while serving on five cutters. Commissioned as a Lieutenant and promoted to Lieutenant Commander, he was the first Coast Guardsman to earn the Navy Cross in World War II, and the first Coast Guard Officer to receive the award for a combat action in direct confrontation with enemy forces.

The sinking of the German U-352 took place while the ICARUS was enroute to Key West from the Cape Lookout. A sonar contact was picked up and Jester anticipated the presumed U-boat’s next move and dropped 5 depth charges. Then, as the sonar picked up the target again, the ICARUS moved to intercept and dropped two more depth charges, apparently hitting the sub as bubbles were seen rising to the surface. Passing the spot again, three more depth charges were dropped. Shortly, after the sub surfaced, the ICARUS opened fire with machine guns and prepared for a ramming maneuver but the sub crew abandoned ship and the ICARUS sunk it with one more depth charge. They picked up 33 crew members, including the U-352 commander, and delivered them to the Commandant of the 6th Naval District at Charleston Navy Yard. Jester was also credited with capturing another sub with a crew of eighty enemy seamen. He died on 31 August 1957 and is buried in Arlington National Cemetery.