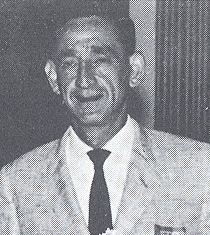 Master Sergeant Arooth, was awarded the Distinguished Service Cross for extraordinary heroism while participating in a bombing mission over Germany on July 30, 1943. As tail gunner, he shot down three enemy airplanes and even though the airplanes oxygen line was broken, one gun was jammed, and he was severly wounded, he remained at his post, repaired his gun, resumed fire, and destroyed the fourth plane. in 1958, Arooth was selected as a pallbearer at the ceremonies of the burial of the Unknown Soldier of World War II at Arlington National Cemetery.