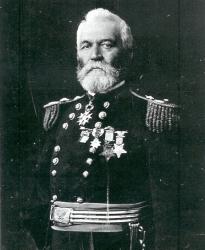 Major General OLIVER O. HOWARD, was awarded the MEDAL OF HONOR for his heroism at Fair Oaks, Virginia on 1 June 1862 while leading the 61st New York Infantry in a charge in which he was severely wounded in the right arm. Disregarding the wound, he continued in battle and received a second wound in the same arm, necessitating amputation.

General Howard was the National Commander of the Medal of Honor Legion in 1903-1904.