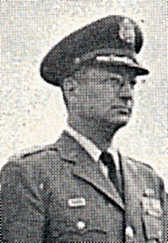 PAUL G. ATKINSON, JR. received his Distinguished Service Cross on 23 January 1945 while serving as pilot of an A-26. Just prior to starting a bomb run, his aircraft was severely damaged by anti-aircraft fire. He was struck in the face and his bombardier’s leg was almost severed. Despite these tremendous obstacles, he made the bombing run with excellent results. Then, since the bombardier was not able to bail out, he successfully made a crash landing once he got over friendly territory. His extraordinary heroism saved the life of the bombardier. Colonel Atkinson was a veteran of 62 combat missions with the 9th Air Force in Europe.