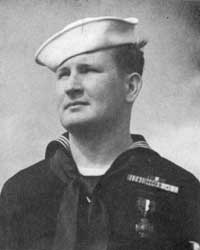 PAUL L. CLARK, Fireman First Class, United States Coast Guard. For extraordinary heroism while serving as engineer of a landing boat attached to the U.S.S. JOSEPH T. DICKMAN during the assault on an occupation of French Morocco from November 8 to 11, 1942. When a hostile plane strafed his boat with machine-gun fire, mortally wounding the bowman and severely injuring the coxswain, Clark, with quick initiative, immediately withdrew from the beach. Speeding toward the U.S.S. PALMER, he placed the wounded men aboard and although his craft was riddled by enemy bullets, courageously returned to his station at the beach. His outstanding skill, resourcefulness, and unselfish devotion to duty were in keeping with the highest traditions of the United States Naval Service.