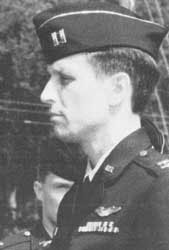 CAPTAIN PAUL T. JOHNSON, United States Air Force. For extraordinary heroism in military operations against an opposing armed force during Operation DESERT STORM on 21 January 1991. On that date, Captain Johnson was the flight lead on Sandy 57, a two-ship of A-10s tasked for search and rescue alert at a forward operating location. While enroute, he received tasking to look for an F-14 crew that had been shot down the night before. During the next six hours he would lead his flight through three aerial refuelings, one attack on a possible SCUD missile site, and three hours of intensive searching deeper inside enemy territory than any A-10 had ever been. He risked his life as he had to fly at a mere 500 feet in order to pinpoint the survivor’s location. When an enemy truck appeared to be heading toward his survivor, Captain Johnson directed his flight to destroy it, thus securing the rescue. It was his superior airmanship and his masterful techniques at orchestration that made this rescue happen – the first in the history of the A-10 weapons system. Through his extraordinary heroism, superb airmanship, and aggressiveness in the face of the enemy, Captain Johnson reflected the highest credit upon himself and the United States Air Force.