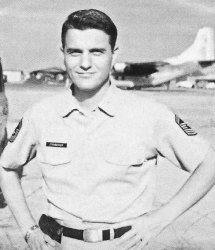 For conspicuous gallantry and intrepidity at the risk of life, above and beyond the call of duty. Chief Master Sgt. Richard L. Etchberger distinguished himself by extraordinary heroism on March 11, 1968, in the country of Laos, while assigned as Ground Radar Superintendent, Detachment 1, 1043rd Radar Evacuation Squadron. On that day, Chief Etchberger and his team of technicians were manning a top-secret defensive position at Lima Site 85 when the base was overrun by an enemy ground force. Receiving sustained and withering heavy artillery attacks directly upon his unit’s position, Chief Etchberger’s entire crew lay dead or severely wounded. Despite having received little or no combat training, Chief Etchberger single-handedly held off the enemy with an M-16, while simultaneously directing air strikes into the area and calling for air rescue. Because of his fierce defense and heroic and selfless actions, he was able to deny the enemy access to his position and save the lives of his remaining crew. With the arrival of the rescue aircraft, Chief Etchberger without hesitation repeatedly and deliberately risked his own life, exposing himself to heavy enemy fire, in order to place three surviving wounded comrades into rescue slings hanging from the hovering helicopter waiting to airlift them to safety. With his remaining crew safely aboard, Chief Etchberger finally climbed into the evacuation sling himself, only to be fatally wounded by enemy ground fire as he was being raised into the aircraft. Chief Etchberger’s bravery and determination in the face of persistent enemy fire and overwhelming odds are in keeping with the highest standards of performance and traditions of military service. Chief Etchberger’s gallantry, self-sacrifice, and profound concern for his fellow men, at risk of his life, above and beyond the call of duty, reflect the highest credit on himself and the United States Air Force.

Chief Etchberger’s 1968 Medal of Honor recommendation was downgraded that year to the Air Force Cross since the action took place at a secret location in the country of Laos which was in violation of existing treaties. His heroic action was revisited in 2004 by retired MSgt. Robert L. Dilley who did not know Etchberger but was assigned to the 1st Combat Evaluation Group in Bismarck, ND where Etchberger departed to join the unit in Laos. Dilley’s work cumulated in MOH being awarded by President Obama to Etchberger’s relatives in a 2010 White House ceremony.