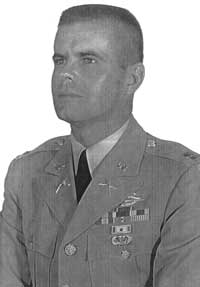 Captain Richard S. Agnew (then First Lieutenant), of the United States Army and member of an infantry company, distinguished himself by extraordinary heroism in action against the enemy in the vicinity of Mundung-ni, Korea. On the night of 19 July 1953, Lieutenant Agnew was serving as the leader of a combat patrol operating far ahead of the United Nations main line of resistance when he and the assistant patrol leader fell from a cliff. Although his ankle was painfully injured and he was in enemy territory, Lieutenant Agnew ordered the patrol to return to friendly lines and establish plans to rejoin allied forces the following evening. The following night, Lieutenant Agnew and his comrade scaled the cliff and proceeded toward United Nations territory. When challenged by an enemy soldier, Lieutenant Agnew ignored his weakened condition, engaged him in hand-to-hand combat and killed him with his own weapon. Hearing other enemy forces advancing, Lieutenant Agnew then pulled the pin on his remaining hand grenade and tied it to his hand before falling to the ground in exhaustion. He was later found in a semi-conscious condition by a United Nations patrol. The extraordinary heroism exhibited by Lieutenant Agnew on this occasion reflects great credit on himself and is in keeping with the finest traditions of the military services.