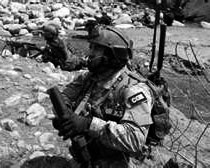 For extraordinary heroism in military operations against an armed enemy of the United States in Herat Province, Afghanistan, on 5 October 2009. On that date, while assigned as a Special Tactics Combat Controller to an Army Special Forces detachment, Sergeant Gutierrez and his team conducted a high-risk nighttime raid to capture the number two Taliban leader in the region. During the initial assault, the team was attacked with a barrage of rifle and heavy machine-gun fire from a numerically superior and determined enemy force. As Sergeant Gutierrez changed firing positions with a teammate, he was shot in the chest, his team leader was shot in the leg, and the ten-man element was pinned down in a building with no escape route. In great pain and bleeding profusely from his chest wound and from his nose and mouth, and confronting the very real possibility that he would die, Sergeant Gutierrez seized the initiative and refused to relinquish his duties as joint terminal attack controller. Under intense fire, he engaged Taliban fighters with his M-4 rifle and brought airpower to bear, controlling three danger close A-10 strafing runs with exceptional precision against enemy forces just 20 feet away. After the first A-10 attack, the team medic performed a needle decompression to re-inflate Sergeant Gutierrez’s collapsed lung, allowing him to direct the next two strafe runs which decimated the enemy force and allowed the team to escape the kill zone without additional casualties. Throughout the four-hour battle, Sergeant Gutierrez’s valorous actions, at great risk to his own life, helped save the lives of his teammates and dealt a crushing blow to the regional Taliban network. Through his extraordinary heroism, superb airmanship and aggressiveness in the face of the enemy, Sergeant Gutierrez reflected the highest credit upon himself and the United States Air Force.