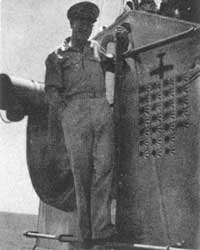 REAR ADMIRAL ROBERT JOHN ARCHER for extraordinary heroism as Commanding Officer of the U.S.S. EVANS, in action against enemy Japanese forces while assigned to Radar Picket Duty off Okinawa on May 11, 1945. When his ship was subjected to attacks by an overwhelming force of enemy aircraft for one and one-half hours, Captain (then Commander) Archer directed the gunfire of his batteries in shooting down fifteen enemy planes and assisting in the destruction of four others. Although the EVANS was severely damaged by hits from four suicide planes and in a sinking condition, he led his crew in determined efforts to save the ship and bring her safe to port. His professonal ability, courage and devotion to duty upheld the highest traditions of the United States Naval Service.