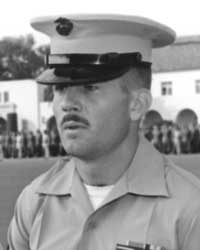 RUSSELL P. ARMSTRONG. For extraordinary heroism while serving as a Platoon Commander with Company I, Third Battalion, Twenty-sixth Marines, Third Marine Division in the Republic of Vietnam on 7 and 8 September 1967. While moving toward the battalion perimeter near Con Thien, Company I came under a heavy volume of rocket, mortar and artillery fire supporting an attack by a reinforced North Vietnamese Army company which caused numerous casualties and separated the friendly unit into two groups. Rapidly assessing the situation, Staff Sergeant Armstrong fearlessly raced across the fire-swept terrain as he consolidated his position and organized a defensive perimeter. Shouting words of encouragement to his men and directing their suppressive fire against the enemy, he was supervising the movement of the more seriously wounded Marines to the center of the position when he was severely injured in both legs by a hostile mortar round impacting nearby. Unable to walk, he dragged himself across the hazardous area by the use of his arms alone and resolutely directed his platoon in successfully joining with the main body of the company. Although in great pain, Staff Sergeant Armstrong steadfastly refused medical evacuation and skillfully began coordinating artillery and mortar fire against the enemy soldiers, frequently adjusting the rounds to within 50 meters of friendly lines. Although periodically lapsing into unconsciousness, he continued his determined efforts throughout the night, crawling among his men to encourage them and ensure that every possible avenue of enemy approach was effectively covered by firepower. Upon the arrival of a relief force in the early hours of the following morning, he permitted himself to be evacuated only after ascertaining that all of his Marines were accounted for and the more seriously injured had been removed. His heroic and decisive actions were instrumental in his unit’s accounting for over 60 of the enemy killed. By his courage, aggressive leadership and selfless devotion to duty, Staff Sergeant Armstrong upheld the highest traditions of the Marine Corps and the United States Naval Service.