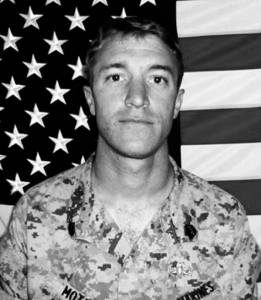 Sky R. Mote, United States Marine Corps: for extraordinary heroism while serving as Explosive Ordnance Disposal Technician, Marine Special Operations Team 8133, First Marine Special Operations Battalion, U.S. Marine Corps Forces Special Operations Command, in support of Operation ENDURING FREEDOM. While conducting village stability operations in Helmand Province on 10 August 2012, the Marine Tactical Operations Center came under automatic small arms fire from a rogue Afghan uniformed policeman attacking from inside the perimeter. Working in an adjacent room and unseen by the attacker, Staff Sergeant Mote could have exited the structure to safety. He instead grabbed his M4 rifle and entered the operations room, courageously exposing himself to a hail of gunfire in order to protect his fellow Marines. In his final act of bravery, he boldly engaged the gunman, now less than five meters in front of him, until falling mortally wounded. Staff Sergeant Mote’s heroic and selfless act assisted in halting the enemy assault and ultimately forced the enemy to withdraw, enabling all but one of the other Marines to get to cover and survive. By his decisive actions, bold initiative, and complete dedication to duty, Staff Sergeant Mote reflected great credit upon himself and the Marine Corps and upheld the highest traditions of the United States Naval Service.

Mote, an explosive ordnance disposal technician, hailed from El Dorado, CA. He was killed in action on 10 August 2012 while serving in Afghanistan on his third combat deployment. The Navy Cross was presented to his parents at Camp Pendleton by Major General Mark A. Clark, the commanding general of Marine Corps Forces Special Operations Command. His membership in the LOV is sponsored by Justin Lehwe, NC.